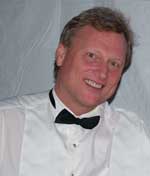 Larry began playing the piano as a child growing up in New York. He quickly progressed as a young pianist, winning numerous young artist competitions and awards, studying with William Hargrove and Herbert Rogers of the Juilliard School. Larry completed a bachelor’s degree in piano performance at Indiana University, studying with Alberto Reyes and John Keeton, and later finishing a Master’s degree in Music in New York.

While in New York, Larry was the artistic director and conductor of the Bach Festival Choir and Orchestra, performing throughout the New York area to considerable acclaim. Larry developed a strong reputation while in New York as a vocal coach, accompanist, chamber music performer, teacher, and conductor.

Later, he pursued a career in medicine, bringing him to Augusta, where he is now working as an endocrinologist. He has appeared with the Augusta Symphony numerous times since his return to Augusta, performing as a pianist with the orchestra, as a soloist with the chamber orchestra, in concert with the chamber players, as soloist on the Appleby series concerts and Westobou festival, and is a regular performer in the area. His compositions have been performed by the Augusta Choral Society and St John Choir.